Skip to content
Guest article by Bryan Cronan
Emory University
Kampung Dala is tucked deep in the jungle outside Gerik, Perak. It’s an idyllic place. Fruit trees and flowers surround small family compounds. Kids play in the lush yards between the homes as the adults lounge on bamboo platforms. 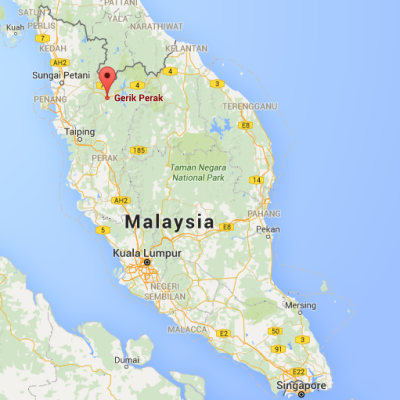 Dala’s villages are part of the Temiar tribe, commonly referred to as Orang Asli. They have their own language, spiritual beliefs, and traditions. For generations these hunter-gatherers have lived off of what the jungle provides.

I made my way out to Kampung Dala during Hari Raya1 to visit a group of teachers that myself and a few other ETAs tutor. SUKA Society, a Malaysian non-profit, connected us with these teachers from a preschool in the village meant to provide an early education for the Temiar children, who typically fall behind their peers in the first few years of primary school. The teachers, Jisam, Busan, Asuaniza, Rosmanizawani, Hamidah, and Juna, want to learn English so that the students are exposed to the language early. Since March, Rie, Jonah, Akirah, and I have held a two-hour tutoring session every week. When we first started the sessions, the teachers knew only a few words. Now they are able to string together short sentences.
When I got out of the car in Kampung Dala, the sight of me sent the kids into a hilarious fit of fright and excitement. Jisam said this area had never had a non-Malaysian visitor. I spent that afternoon hanging out and amusing the steady flow of aunts and uncles who came by to inspect me.
What struck me at first in Dala was the amount of modern amenities; they have consistent electricity and handphones (though there is no cell service), and at one point Flo Rida’s “Apple Bottom Jeans” played over a speaker system. There was even a bamboo hut, with no walls or running water, that had a flat screen television and satellite cable.
The first night I was invited to attend a traditional dance called sewang. I was given a grass hat, wrapped in beads called manik goul, and handed a bouquet of leaves called a calon. Housed in a bamboo hut called mek mangal, the dance is simply walking in a circle, occasionally adding in a hop, for hours to the traditional samey2 music, which is composed by five women beating bamboo sticks against a plank while men sing a hypnotic tune.
The main entertainment for everyone came later in the night when the labyrinth of dance and music induced pukau, or a sometimes-violent trance. As we walked in a circle, a group of men began summoning the spirits by blowing and whispering into their calon. When they saw someone looking a little too reverie, they would place the calon on the person’s heart, which would send them into a flailing trance until they could be restrained. Then two friends would grab the person under the arms and dance back and forth with them until the spirit departed the body. Each time, the kids ran away laughing and trying not to be put in a trance themselves. I went to a sewang dance every night I was in Kampung Dala. Each night we left around 2 a.m., well before the party was over. I think I walked a marathon while circling the hut.
On my second day, I joined a group of men for a hunting and fishing trip in the jungle. We walked barefoot through a river, casting nets into the shallow pools and occasionally pulling leeches off our feet. The men were in their element. They steadily made their way along the river rocks, stopping at certain points to survey their surroundings. They were able to spot small animals in the brush and edible plants along the riverbank, showing off the knowledge that’s only attainable from a lifetime in the jungle. At one point, Abus, a tough-looking but incredibly kind man, grabbed some leaves and said in Bahasa Malayu, “Malays don’t eat these.” When I asked why, he said, “They don’t know that you can.”
After roasting the fish we caught, we returned to the school. While sitting around drinking teh tarik3, the group of men asked if I could teach them some English. They sat in the preschool classroom, pen in hand, as I went over some basic phrases. Like my secondary school students, they would say, “Teacher, I don’t understand. Teacher, how do you say?” The lesson went on for more than an hour, and, afterwards, the guys laughed as they tried out their new English phrases. It was one of the most rewarding moments I’ve had in Malaysia.
I went on to spend two more days in Kampung Dala. Jonah and Brendon, an ETA from Terengganu, joined me. We ate squirrels and a bird that the guys had killed using their traditional blowgun, known as a sampit. We took baths in a serene lake behind the compound and spent a day on the lake fishing. The many tribes known collectively as Orang Asli face a lot of problems. Most are extremely poor, unable to access healthcare, and lack a formal education. Many of my students ridicule one another using the term Orang Alsi. But the people of Kampung Dala are some of the most beautiful and resourceful people I’ve met in my travels. The life people lead may not be a life we wish to lead, but that doesn’t mean it’s inferior. Outsiders pressure Orang Aslis to leave their villages for modern lives, but for these people, their solace is in the jungle.