My school was recently hit by a violent, night time tornado that destroyed a number of buildings, impaling roofs with wooden beams and hurling shingles all over the grounds. But as scary as the event was, the tornado ended up providing a meaningful framework for my role here as an American ambassador and educator. The immediate aftermath of the tornado created a unique cultural opportunity for me to interact with students and staff in a new way. As a result, the tornado became both a teaching moment and an instance of reflection in my classrooms.

When I arrived at school on the morning of June 22nd, I was surprised to see multiple wooden support beams exactly where they should not be: awkwardly jutting up towards the sky. I shot up to my Form 5 (high-school seniors) class on the fifth floor of the science building and was shocked to see that the place was completely roofless. A co-worker appeared behind me and commented, “Tornado.” I nodded quietly. At this point, I realized that this was no ordinary day at school, and decided to hit the ground to evaluate the situation and check the extent of the damage. The school was in complete disarray — doors were unhinged, sidings were thrown about and metallic fragments dotted the parking lot. 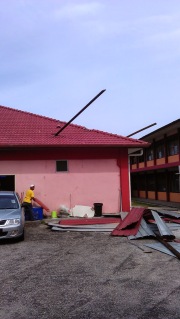 I quickly grouped up with a few other teachers in an effort to clean up the grounds. We were soon joined by upper-form students. We scoured the campus as a single unit: moving 20-foot roof segments and picking up tilings, loose nails, wood fragments and other debris. I found myself in a special position to do some manual labor — to do something physical, with students and teachers, an opportunity I have never had and truly cherished. I was bonding with teachers that I had never even met before. I shared stories about my own natural disaster experiences in the U.S. with a group of students. A newly discovered friend, Mr. Goh, joked that I should donate USD 50,000 to the school’s clean-up fund! (I gave him Alex Lieberman-Cribbin’s phone number).

We were making a difference in our little corner of the world — as we moved each roof-segment, a new pathway or parking space or common area became open and accessible. The fruits of our labor were concrete and visible. It was a satisfying and solidifying experience.

Later in the week, I learned that my Form 4 class was relocating to the school computer lab since their own class building had been destroyed by the tornado. This was a great chance for me to bring in technology to a class that had previously been without it. I was afforded the opportunity to do a number of projector-based exercises. I shared pictures from my previous job at a law firm. In fact, I did an exercise on the oppression of cubicles and office politics. I also did a short bit about Newark, NJ, one of the most violent cities in the U.S., and also where I used to work — and the roles that crime and poverty play in everyday life there. The kids enjoyed seeing pictures of the U.S., especially of my friends and family in NJ and NY. Thanks to the tornado, I was in a position to harness technology and create a positive and personal connection with my students.

The tornado incident inspired me to create a series of tornado-themed lessons for my students. I have done brief exercises about the science behind tornados. Some other lessons included creative writing exercises asking students what would happen if the tornado had hit the school during a weekday or why the tornado chose this particular school and not other schools. I’ve done a few more serious critical thinking exercises, asking students to think about the emotions that the sheer destruction of tornados can evoke. I have also modified a few games to include tornado elements or rules. Examples include: Tornado Backs to the Board, Tornado Hot Seat and Tornado Stop The Bus.

The transformation of troubling events into hopeful teaching moments is a hallmark of the American ethos. (I discussed this idea further in a recent piece on the MH-370 tragedy and what it has meant to students in Batu Pahat, Johor).

I’m honored to play a small role in instilling hope in my Malaysian community this year.

One thought on “Teaching Tornados”